During the last weekend of October 2013, the ISU American Sign Language Club hosted an ASL Immersion Weekend. The weekend was funded from the internal Women’s and Diversity Grant Program under the project title Expanding Opportunities for the Deaf and ASL Community at Iowa State University, written by Dr. Jonathan Webb, Lecturer in ASL in the Department of World Languages and Cultures.

The impetus behind holding an immersion weekend was to offer students authentic opportunities to live, breathe, and eat in ASL. While holding a 50 minute class in a voice-off, ASL-utilizing format is certainly helpful, it isn’t authentic immersion. Many students of other world languages are able to immerse themselves in another country and culture to have a full-on authentic language experience, whereas the land that ASL belongs to is the United States. Recognizing such, Dr. Webb and the ASL Club determined to provide an immersion experience that would allow both deaf individuals to exist in a pro-visual environment, and students to share this deaf and visual space with native language users. 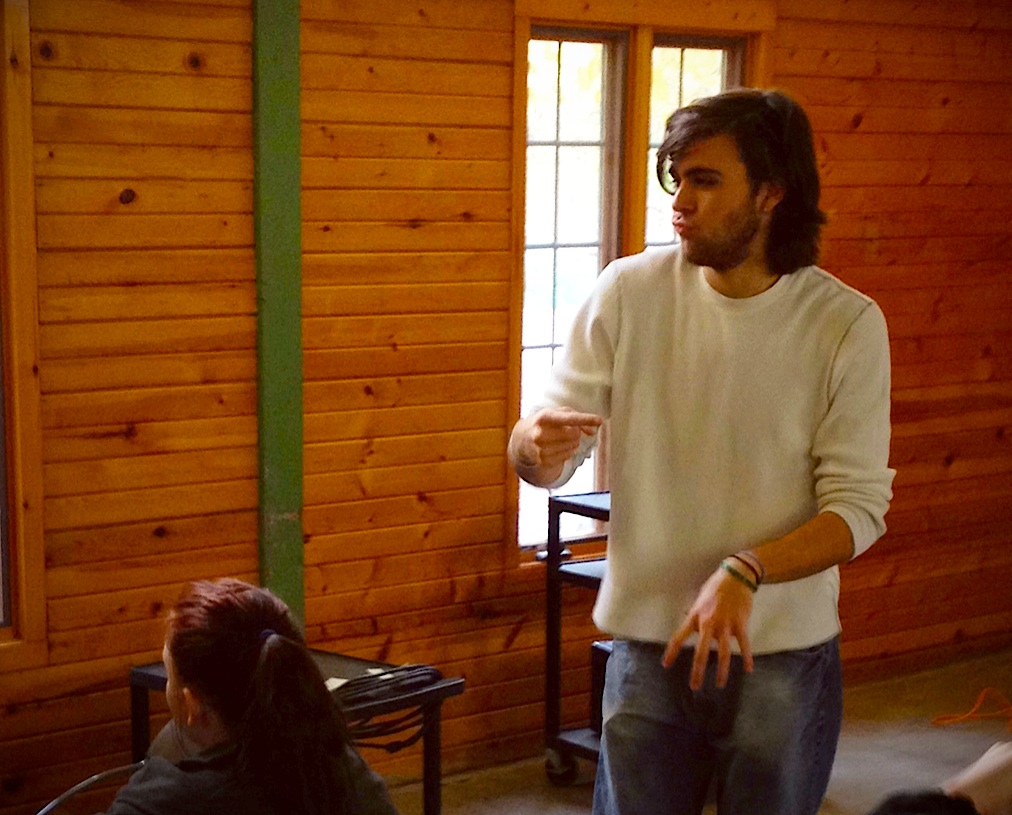 It was determined early on that the immersion experience would be held in a laid back and intimate setting, reflective of the grassroots Deaf Community. The YMCA Des Moines Y Camp located in Boone, Iowa was recognized as an ideal setting. And while there was concern that the late October temperatures might not be amicable to the gathering, all were pleasantly surprised that the weather was quite balmy for a midwest fall. Cabins were selected at the campground that surrounded a large fire pit which would come in handy Friday evening. The group also had access to a large lodge where workshops, games, and various other activities would take place.

Participants began to arrive to the weekend, many of them students, and most of them visibly nervous. If you can think back to the first time you visited another country, you likely can remember the mixed feelings of sheer excitement and utter trepidation. Deaf participants of course had no worries, but most students wondered if and how they would be able to communicatively survive. This was particularly true for well over half of the group, as they had been in their first ASL class for no more than eight weeks. True to Deaf Community values though, young students were embraced, nurtured, and made to feel confident.

Friday afternoon consisted of icebreakers that supported students in warming up to the idea of taking communicative risks, learning to trust that they would indeed find a way to communicate. Eventually it was time for dinner, and even this was a unique and rich experience for students. Dinner was served family style, and there were no structured activities. At the beginning of the meal most students sat in stunned silence, unsure of how to initiate and then continue natural conversations over a meal, but by the end everyone was signing, laughing, and building friendships. Students in their third semester of ASL proactively taught younger students the correct vocabulary for food items. What was especially rich about the silent meal experience was that there were cooks and camp workers present. When communication with these hearing non-signers was necessary, students found creative visual ways to get their point across without moving into spoken English. Students gained a deeper appreciation of the Deaf Community and what it is like to live as a deaf person in a predominately “hearing world.”

After dinner, the group returned to the lodge and began a very active, visually loud, and fun game of Mafia. As the sun set, the highlight of Friday evening began. Participants bundled up and headed outside under the stars, surrounding a beautiful fire. S’Mores were shared, people huddled in together towards the fire, and the rich tradition of Deaf Storytelling began. Scott Johnson, a Deaf senior in Civil Engineering took the lead and shared stories and parables from the U.S. Deaf Culture and Community. Students were enthralled at the beauty of the language. Jibril Jaha, a Deaf Scientist working in USDA Labs also contributed to the storytelling, bringing about many laughs. By 11:30 the group broke up- some heading to bed, others going on a starry hike, and others heading back to the warmth and light of the lodge to continue the story and joke telling.

In the morning, after a hearty breakfast, workshops commenced. Dr. Webb led a workshop in developing use of classifiers in ASL Storytelling. Scott Johnson, along with Rachel Johnson, spouse and Deaf senior in History led a workshop on Deaf Grassroots Theater and Improvisation. After these two excellent, hands-on workshops, students made their way back for a final meal together. At the conclusion of lunch, a third workshop was offered jointly by Dr. Webb and Scott Johnson that supported participants in learning how to craft simple Deaf/ASL Poetry. ABC and Number stories were explored, as well as Handshape Poetry.

The afternoon wrapped up with certificates, well-wishing, hugs, and long extended goodbyes- completely indicative of Deaf Culture. The Deaf Community is a tight knit community, with its highest value being shared visual language. As such, when deaf people gather together, it often takes a long time for them to part from each other; it isn’t often that deaf individuals get to share space with others who value things of the eye more than the ear. Students unconsciously picked up on this, and they too had no other desire than to simply remain in the setting, immersed in the language and community.

On the completion of the weekend, there was only one complaint and it was from the advanced students. There was a real sense of jealousy that emerged as they watched their younger colleagues immersed in the experience only eight weeks into learning ASL. Unanimously they wished they’d had the same experience during their initial coursework. Students, new and experienced, collectively requested that another immersion weekend take place soon.

The following excerpts come from two students who submitted reflections on immersion weekend.

“Immersion Weekend was totally wicked! (Quoted from the movie The Incredibles). Immersion Weekend was literally one on the best experiences I’ve had so far in ASL, and I’m a little jealous of the ASL 1 students who took advantage of it. There were three specific things that stood out to me during the weekend. First of all I was extremely impressed by the ASL 1 students who came. As the weekend progressed they really broke out of their shells and took advantage of the experience. They were very enthusiastic and incredibly willing to learn. I’m really excited to see how their language will progress since seeing their passion for signing over just one weekend. The second thing that really stood out to me was the improvement of my own language. As I was signing with many of the ASL 1 students I caught myself using correct facial grammar and body language as if it were instinct. I thought this was really cool because it shows that my language is improving whether or not I feel like it is on a somewhat consistent basis. The final thing that I really loved about Immersion Weekend was how close and accepting everyone was. It was an awesome authentic experience of how the Deaf community functions and treats each other. I feel from this weekend I actually got to experience a lot of the cultural aspects that I have learned throughout this year about the Deaf community and Deaf culture instead of it just being head knowledge. Overall Immersion Weekend was a great experience and I’m ready for the next one!!”

“Immersion weekend was an amazing opportunity. I feel so much more confident in my signing, but at the same time it made me realize how much more I have to learn. It gave me a unique picture of the Deaf community and culture, and it really felt like I was hanging out with friends even though I had never met more than half of the group. I cannot wait for the next opportunity to attend an event like this. I think maybe this should be a twice-a-year thing instead of just annual.” 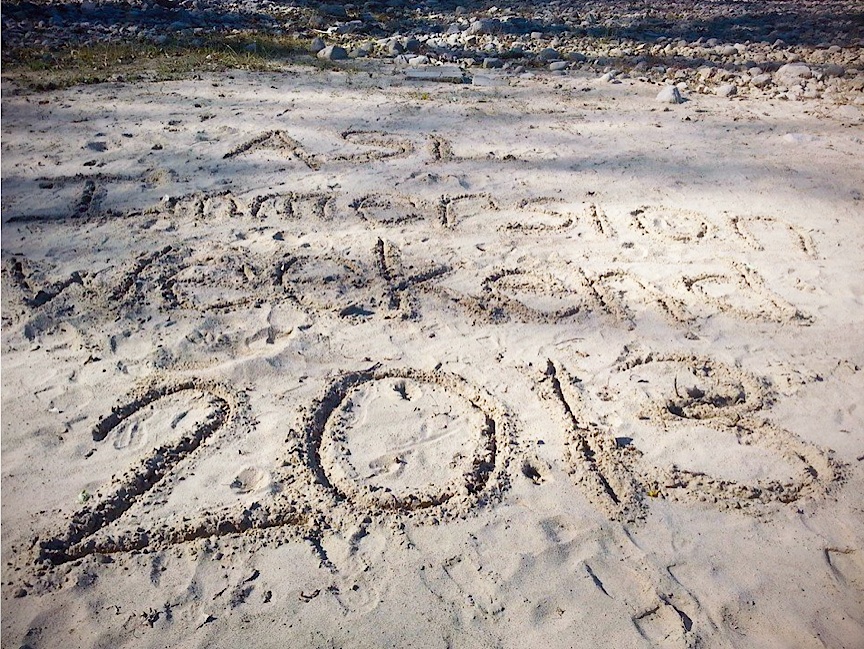