Brenda Tyrrell, Classical Studies major and World Film Studies minor delivers a paper at a conference at the University of California, Riverside

Over Halloween weekend, I attended the 112th annual Pacific Ancient and Modern Language Association (PAMLA) Conference in Riverside, California. The conference was organized by the University of California, Riverside, and lasted three days and involved hundreds of sessions with topics ranging from Games of Thrones, film and literature, magic and witchcraft, gender studies, and various other topics related to literature. As the conference was held over Halloween weekend, many of the topics were geared toward the lore and “spookiness” of this holiday. In fact, there was even trick-or-treating and a costume ball.

The title of my paper was “The Bloodless Spirits Wept”: Orpheus’s Perpetual Love through Literature and Film, which I presented along with a panel of three other students discussing film and literature. My particular paper involved a comparison and contrast between the 1959 film Orfeo Negro and the narrative of Orpheus and Eurydice written by Ovid in 8 AD. The focus of my paper was two-fold: the appearance of Hermes (guider of souls to the Underworld) and the function of music in both the film and the myth. If you are familiar with the myth of Orpheus, you may be aware of his musical prowess. Ovid describes his talent as so magnificent that the bloodless spirits wept, Tantalus’ hunger abated, Ixion’s wheel stopped turning, and even Hades and Persephone were touched by his music. Even if you are unfamiliar with the other references in this section, the magnitude of Orpheus’ talent is well-supported. Given this fact, it seemed odd to me that the director (Marcel Camus) of Orfeo Negro would choose to have the most poignant scene in the film (Eurydice’s death) completely void of music. This, along with the appearance of Hermes, perked my interest for further research, which led to the production of my paper and an invitation to share my findings with my peers. The conference was a great success and I loved Riverside! The people were friendly, hospitable, and willing to take strangers under their wing for a weekend. We were even serenaded by a homeless, multi-talented guitar player (ironic given the topic of my paper) while we dined. We stayed at The Mission Inn, which is incredibly beautiful and is also a national historic site. The oldest bell in Christendom can be found there – the bell itself was created around 1247. 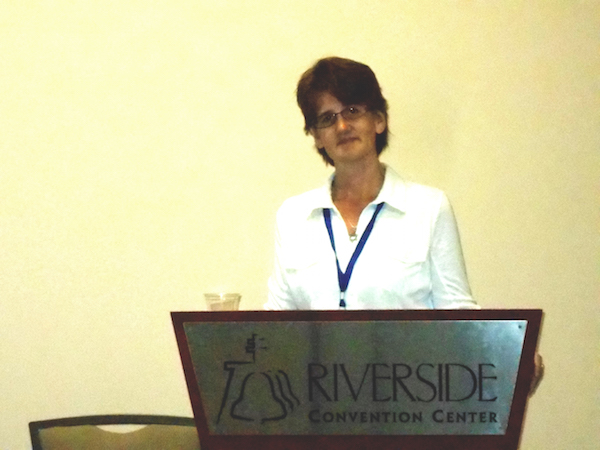 To share a bit more about myself, I am a double major in English and Classical Studies, as well as a World Film Studies minor. I became interested in this particular topic after watching Orfeo Negro in a Classical Studies film class. Iowa State offers a wide variety of film classes, including French, Russian, Chinese, German, and English. I can honestly say that after all my instruction with the film classes, I will never look at films the same way again, which is a good thing! After graduating next May with my Bachelor’s degree, I intend on continuing on to eventually receive my PhD in English Literature, with a heavy focus in Literary Criticism and Theory, along with late Victorian/Edwardian literature. The techniques acquired from the Film Studies minor will enhance my understanding of culture and society represented in not only literature of the time, but in the films of the time as well. Attending conferences and networking with other students with shared interests is not only academically fulfilling, it is great fun as well!