Exploring the World: My Time in China 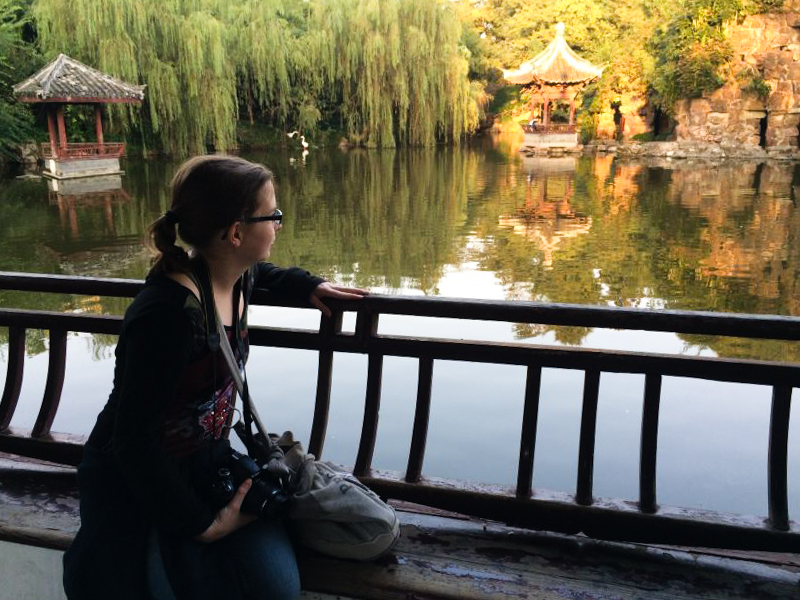 Hello, my full name is Katharina. In the United States most people call me Kat. In my home country Germany, most people call me Kati. People who speak Chinese call me Rina and my special friends in China call me Nana. I was born and raised in Germany and have spent two years so far at Iowa State University studying History, Journalism and Chinese.  I love to explore cultures, to meet people and to learn languages. Once you can speak a country’s language there is no better feeling than diving fully into its culture. I loved to get to know the United States more, to learn more about its people and to fully master English. The experiences I have made, have changed me vastly as a person and opened my horizon indefinitely.  In fact, exploring the diversity of the world has become so addictive that I am right now living in yet another country. Right now I am in China. For a semester I studied abroad from my study abroad degree so to say. Below you can read about my amazing experiences and what I have learned so far about the Middle Kingdom and it’s people.

China is one of the largest nations in the world with the largest population of any country. It has a vastly diverse geographical features. During my time here so far, I had the chance to travel to the outskirts of the deserts reaching into Inner Mongolia, explore the wide alleyways of Beijing, travel with friends to their grandparents little countryside villages and live in the metropolis of Shanghai. While there is still so much more to explore, China has already proven a very beautiful country. Both the landscapes but also it’s cities are breathtaking. it’s something I actually can’t describe. So I will show you a couple pictures below.

Chinese people are a special kind of people combining more and more western ideas with their ancient attitudes and teachings of Buddhism, Taoism and Confucianism. My Chinese friends explained to me how important family and community are to them. I had the privilege to visit my friends family and experience meals celebrating weddings and engagements. While many of my friends are only children, their parents and grandparents usually have many siblings, creating large extended families that still comes together for important events. I learned that when addressing a family member, there is an exact title for each and every person in Chinese.  Depending on if the family member is older or younger than you, if that person is from your father’s side of the family or your mother’s side of the family and of course whether they are male or female, Chinese children learn how to address everyone. For example, your father’s older brother’s son who is older than  is called your tangge but your you mother’s younger sister’s daughter who is younger than you is called your biaomei. I find this absolutely fascinating for both in English and German both of these people you would just call your cousins.  You can climb up or down the Chinese family tree, there is a word for everyone but it all depends upon where you personally stand. My friends also showed me how respect and filial piety are often still very highly valued in China. Along with the perseverance and curiosity, I have found these to be among the most prevalent characteristics of the Chinese people. They are also extremely friendly people, once one has build a connection. My friend’s family gave me the nickname nana, using the last sylabil of my name and repeating it twice as a sign of endearing. I even was so lucky to be invited into a stranger’s house while exploring an old building complex a century old right in the center of Nantong, a city close to Shanghai. The sweet lady and her family had my friends and me join in her father’s 90st birthday celebration and shared with us their life stories and their food.

Before I came to Shanghai, I had never lived in a city that had more inhabitants than 100 000 people. Shanghai with it’s over 23 million registered dwellers was quite a change for me. But it turned out I loved this city. There is a mix of old and new, and western and oriental that is just vastly fascinating to me. You can see old men riding rusted bikes through the streets carrying piles of bamboo sticks right next to black Maseratis. Between skyscrapers you can find old Buddhist temples and alongside the Po river you take pictures of old British- colonial buildings facing one of them most beautiful skylines in the world. There hasn’t been a day that I have been bored in this city. Every time I step outside of my apartment I encounter something new.

Mandarin Chinese is a labeled as a very difficult language but it is certainly not impossible to learn. The Chinese grammar structure is in comparison to western languages rather simple and while the sentence structure is set up differently it doesn’t take long to get used to it. The reason Chinese is hard to learn for foreigners is the writing system with a symbol  for each word, as well as the concept of differentiating words only through tone of voice.  An example would be this tongue twister: Māmā qí mǎ. Mǎ màn, māmā mà mǎ. It means mother is riding a horse. (The horse is slow, mother scolds the horse). The greatest problems I encountered when I first arrived in China was that I could not read nearly as much as I thought I could. And even though I had been studying Chinese for two years, the different dialects of the different regions were and still often are incomprehensible to me. However each day, I learn a bit more. Each day I can read another sign and understand another person a bit better and as time goes by I understand more and more Chinese. So each day, I also understand China and the Chinese people a bit better. Each day, I dive deeper into this culture. And I already know that I am just as fascinated with China as I am with the United States and this for sure won’t be my last visit to China. I can’t wait to see more.