The 2015 Department of World Languages and Cultures Distinguished Alumni award goes to Roy Salcedo, the Coordinator for Multicultural Programs at the University of Iowa’s Center for Student Involvement & Leadership.

Born in Pico Rivera, California, Roy grew up in El Monte, California, then moved to Winterset, Iowa, at the age of 16. He then attended ISU and graduated in 1998 with a B.A. in Spanish. He is a first generation college student. His mother, Marie Jacobo, never completed high school yet she raised 5 children, all of whom now hold university degrees.  Roy attests his success to his mother’s sacrifice as well as challenge to be a good citizen. 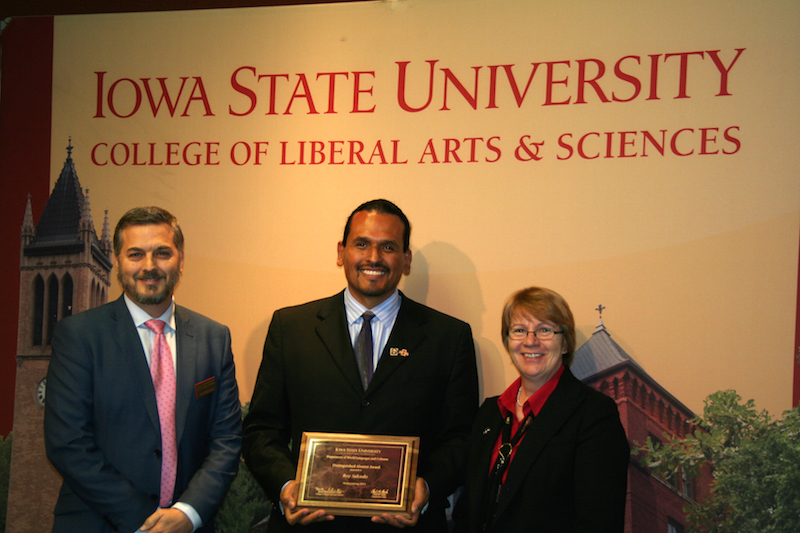 One former professor remembers Roy as a very engaged and upbeat student, and she could not recall any moment when Roy did not have a smile on his face! She moreover states that: “it was clear that Roy genuinely cared about learning the Spanish language, and Hispanic  literatures and cultures.  He demonstrated, in particular, a keen appreciation of the diversity of Hispanic culture.  I was very pleased to see him go on to complete a Master’s degree in higher education before taking up a role in multicultural education.  He is an authentic role-model for our multicultural students!”

Another former ISU professor had this to say about Roy: “Roy was a scholar, an activist, and an entrepreneur.  In class he always showed a keen interest in the written word and in the Spanish American literary heritage.  Outside of class he advocated tirelessly for the success of multicultural and Hispanic students.”

His vast experience has also includes positions at The American School of Paris, the Universidade Estadual do Oeste do Paraná in Brazil, at Iowa State, and at DMACC.