1) How did you decide to become a University professor?

It is the profession that best fits my personality: living a relatively stable life with the passion and leisure to explore the meaning of the world. When I was young, I dreamed of becoming a writer. I read whatever books I could find. But, as I received my education, I realized that, at least in the Chinese tradition, great writers are often created by experiencing personal and national disasters, which I did not have the luck to experience. 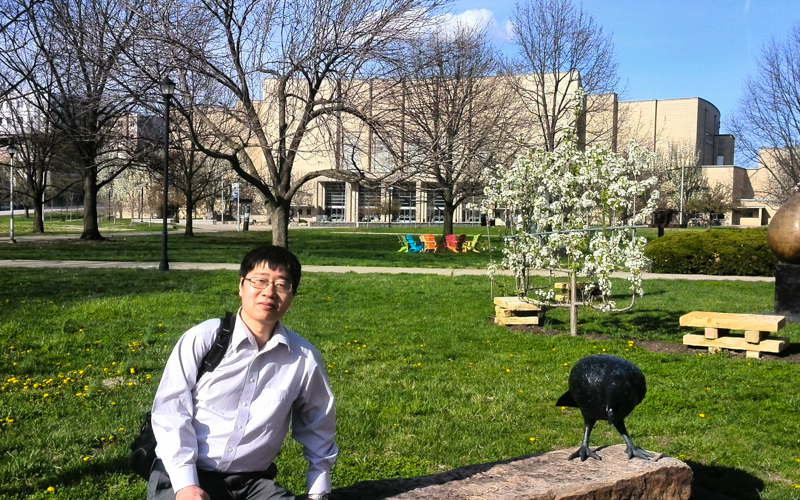 But my passion for literature did not perish. Besides occasional writing doggerel poems for self-entertainment, I became more interested in interpreting the meaning and significance of existing literary works. At college I read extensively, from Nietzsche, Romain Rolland to Lu Xun and Confucius, of course without much time to digest. But at graduate school my interests gradually focused on the 20th century, particularly the problems related to the issues of Chinese enlightenment, violence and belief. Teaching American college students in the United State provides me a cross-cultural context for understanding China. Exchanging ideas with students and answering their (often unexpected and inspiring) questions make my thinking more active and sophisticated.

2) What do you consider to be your most notable professional achievement?
Developing the study abroad program for the Chinese Program. In Summer 2012, I led a group of 13 ISU students to Beijing and Shanghai for two weeks. Besides listening to lectures on Chinese society, we visited the famous cultural heritages, new landmarks, a few state-owned enterprises, joint-ventures, and private businesses. We also made dumplings in a family and chatted with them about their daily life. We also took the bullet train to Shanghai at a speed of 200 miles per hour.

In Spring 2015 I helped to bring about a partnership agreement on sending ISU students to study Chinese in China on full scholarships at Lanzhou Jiaotong University (Lanjiao). I visited Lanjiao last summer. After seeing their classroom teaching, apartment, offices, cafeteria, labs and library, I was convinced that it was a good place for language learning: the facilities were all new, and the administrators, instructors and staff were devoted and cared about students. Furthermore, the city was relatively small (with only 4 million people) and has less entertainments or Western visitors than Beijing and Shanghai. You have to speak Chinese to communicate with people around you. Of course, as the capital city of Gansu province, the city is on the Silk Route and not far away from the numerous cultural heritages such as the west end of the Great Wall, the Grottoes with Buddhist paintings.

3) What have been your most memorable international experiences?
I am originally from China, but with the time living in the United States getting longer, to me the concept of “international” becomes tricky. Traveling between the two countries each year does help me seeing the sociopolitical issues and the rapid cultural transformation in China within a broader context.

If one word is required to describe China today, it can only be “change.” Because of the constant changes I sometimes have an uncanny feeling that I have been becoming a “foreigner” in my motherland. Therefore, I decided to visit China on a regular basis to update my knowledge for the purpose of teaching, doing research, and even surviving in China. I still remember that a few years ago, when I went back to China I was surprised to see that all the banknotes came with only the image of Mao. When I mentioned this to my friends, they said it did not matter who appeared on it as long as it was money. Later I learned that it was for the convenience of anti-forgery. Still this made me think about the “Chinese” way of change today: it is not a radical departure from the past. Rather, it maintains a skillful balance between a rapid embrace of neoliberalism and a symbolic respect to the past. Of course, today if you go to China, you no longer always need to carry a large amount of cash since you can use your smartphone to make payment in many places.

The rapid change in China also urged me to think the necessity of study abroad for ISU students. Among the questions raised by the students I led to China in 2012, one truly startled me: “These people are enjoying their life like us. Where is the sea of red flags and crowds?” It was during our visit to a Buddhist temple and the tourists were at leisure burning incense and walking around. I had to tell the student that such impression of the fanatic revolutionary years was about the China almost forty years ago! Of course, all the positive changes come with an ecological or human cost: some days I could not see the sun due to the smog, and on the walls I could see the protesting posters for people who have lost their homes during the quick urbanization.

4) What is the last foreign country you visited? Is there a place in that country that you recommend anyone to visit?
China. Last summer I visited Beijing, Shanghai, Hangzhou, Lanzhou, Hengshui and Shijiazhuang for both professional and personal businesses. It was a trip crossing half of China.

I have three cities to recommend and you can visit the three during one visit: Beijing, Shanghai, and Xi’an. If time allows, the best way is flying to Shanghai, then take the bullet train to Beijing, and then to Xi’an. Beijing, as the capital city has both numerous cultural heritages such as the Great Wall, the Forbidden City, and modern architectures, such as the Olympic Park and the new airport. Shanghai, the largest city in China with over 23 million people, to some people is similar to Chicago in cityscape. It is a great place for doing business and shopping. Xi’an, being the capital city in pre-modern China for 800 years, has the famous Terracotta, the army guards supposedly serving China’s first emperor after his death. It also preserved the most complete traditional city walls, which have become city parks where people enjoy drinking tea, playing chess, and Taichi. Seen from the historical perspective, it is a travel backward in time.

5) What has been the most interesting or unusual course you taught at ISU?
Chinese 272. It is a course on Chinese cultural traditions. As Confucius says, teaching and learning are always reciprocal. My research focuses on modern China. Through teaching this course I not only learned about the various traditions systematically, but was also able to realize how much more I need to learn about the past in order to better understand the present. Therefore, in my teaching I had to find ways to let students realize that they are not learning about a dead culture irrelevant to contemporary life. On the contrary, the time honored religious faiths, the Confucian teaching about humanity and respect, and the valuing of education and aesthetics are still in Chinese people’s life. Furthermore, teaching Chinese cultural traditions to American students need a cross-cultural understanding. One question I often asked students is, how the Chinese traditions might have contributed to American culture. By thus doing students are able to reflect on the issues in their own culture, such as the challenges facing education. To make the abstract concepts more “tangible,” I sometimes organize field trips. For example, a few weeks ago, my students visited the Brunnier Art Museum to see the artifacts from centuries ago in person and learn about their function and production from the curator’s introduction. It was a great success.