Diego Velázquez (1599-1660), considered to be one of the greatest painters of all time, was the official Spanish court painter and friend to Spain’s King Philip IV (1605-1665).  Velázquez is regarded as one of the world’s greatest painters, and it can be said that he was one of the first artists of his day to paint himself into his own works—the original Selfie!

Velázquez is not the first to make a selfie. Many other great artists such as Michelangelo, El Greco, or Van Gogh included themselves in their own works quite regularly—either in self-portraits or by painting their own likeness into the wider scene.

Velázquez used both techniques, but it is his masterpiece, “Las Meninas” (1656), that provides an interesting intersection of what the selfie is all about:  reality and fiction.  The painting depicts the Spanish Princess, María Teresa, being dressed by her ladies joined by a boy and a dog, a dwarf, and two members of the court. A nobleman in the back of the room exits through an open door.  Light floods the canvas from several points offering an interesting juxtaposition of color and contrasts. Although the princess seems to be the focal point of the work, we cannot forget that Velázquez has included himself among the subjects.  To the left, brush in hand, Velázquez is prominently portrayed.  He and the others stare back at the gaze of the spectator.  It is at this point that we realize that the topic of the painting seems to be King Philip and his second wife, Mariana of Austria, whose reflections are seen in the mirror in the back of the room. 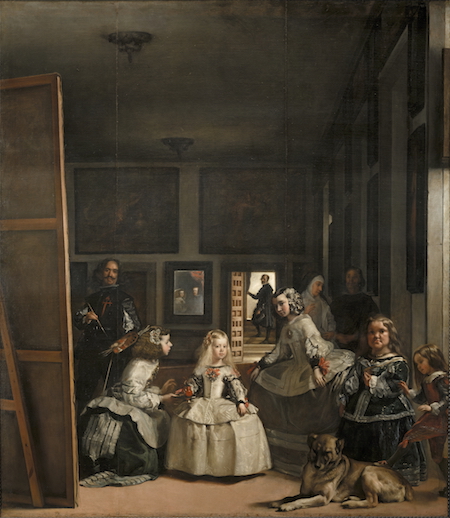 Selfies seek an accurate depiction at a particular moment in time, and Velázquez’s canvas does the same thing.  It is easy to see how the royal couple or the painter himself is the subject of this selfie, but the real subject is you, me… us.  Velázquez made his career painting mythological figures, noblemen, and great historical events—the fiction of life.  But, Velázquez also painted the everyday scenes of ordinary men and women—life’s realities: the drunkards in “El triunfo de Baco” (1628) whose facial expressions are so real to life that it is hard to believe they are painted; the weavers in “Las Hilanderas” (1657) who show us one hard day’s work at the spinning wheel; the boy and the old man in “El aguador de Sevilla” (ca. 1620) that provide a glimpse into a generational divide; or even the many “dwarfs” (there is no great modern translation of the term, which comes from the Spanish term enano) and deformed people that entertained the court such as “Don Sebastian de Morrra” (1645), “El bufón don diego de Acedo” (1645), or “El enano Don Juan Calabazas” (1639), all of whom represent the disfigured, handicapped, or comical of everyday life.

In short, Velázquez captured all of the fictions and realities of life. If today’s selfie belies an attempt at full and accurate disclosure, Velázquez’s “Las Meninas” is no different.