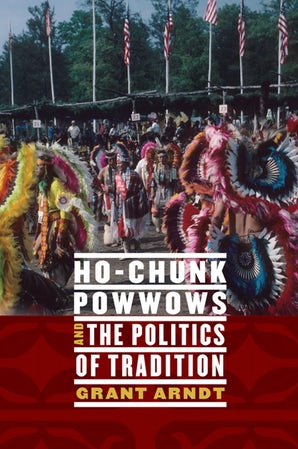 WLC is home to some pretty amazing scholars who are publishing some exciting new texts. Read on to find out about Dr. Grant Arndt’s new book and all of the work he put into it.

“My book Ho-Chunk Powwows and the Politics of Tradition is a study of the history of powwows hosted by the Ho-Chunk Nation in Wisconsin in which I explore the changing importance of cultural performance to Indigenous peoples in the wake of settler colonialism.

Rooted in centuries-old warrior dances, over the course of the twentieth century powwows became a widespread, highly popular, intertribal cultural celebration focused on dance and music. Ho-Chunk powwows began in 1902, making them the oldest powwows in the Midwest and among the oldest in the nation.

My research found that as early as 1908, Ho-Chunk people began to experiment with the commercial potential of the powwow by charging white spectators an admission fee and subsequently contributed to the development of American Indian themed tourist shows in Wisconsin. During World War II, however, they decided to de-commercialize their powwows and rededicate them to honoring their soldiers and veterans, reemphasizing the event’s connection to traditional warrior dances.

Combining my archival research with ten years of ethnographic research focused on contemporary Ho-Chunk powwows, I show how powwows today provide a space within which Ho-Chunk people debate and respond to, the conflict between, on the one hand, a new kind of commercialization of culture linked to the growth of highly competitive, casino-funded, intertribal dance contests and, on the other, ongoing efforts to use powwows to strengthen indigenous values through a focus on veteran recognition and traditional forms of gift-exchange.