When it comes to attracting students to the Languages and Cultures for Professions program (LCP), there’s nothing like a personal testimonial from an alum. As a successful LCP graduate who also lives in Ames, Jesse Leonard (‘14 mechanical engineering, German) has returned to campus several times over the years to give just that at workshops and information sessions.

“I try to emphasize to students that whether they’re in business, agriculture or engineering like me, having foreign language skills is another tool in the tool belt,” said Leonard. “It’s what can make you stand out in an interview or find a solution to a challenge in the workplace.”

Leonard started learning German when he was in seventh grade in Bettendorf, IA, where the school offered a quarter of French, Spanish, and German to students. The rationale of the World Languages curriculum was to get a feel for the different languages before selecting what he would study in high school.

“At the time, German seemed the most interesting to me,” recalled Leonard. “I like working on bicycles, and I was already thinking about becoming an engineer one day, so German was also a good fit for that.”

Indeed, after studying German through high school, Leonard opted to take a year between graduation and starting in the College of Engineering at Iowa State to live and study in Germany for year via the Congress-Bundestag Youth Exchange. He credits that year with helping him to really understand the culture of Germany on an everyday level and not just as a tourist. Soon after starting his studies to become a mechanical engineer, Leonard realized that he could continue his German.

“I thought initially I’d go for just a minor,” he said. “I could speak German fairly well at that point, so that’s initially that’s what I signed up for.”

But sometime in his sophomore year, Jesse figured it would not that much more work to get the major via the Languages and Cultures for Professions (LCP) program. Soon he realized that his German studies made for a nice counterbalance to his engineering courses.

“With my primary major being so heavily focused on equations and quantitative thinking, it was a nice change of pace to take a German class each semester,” he recalled.

Upon graduation, Jesse admitted that his main goal was to simply “get a good engineering job,” so he felt pretty lucky when he landed with the Ames branch of Danfoss, a Danish engineering company.

“I had completed an internship during college with them, and I was very interested in the work they do,” he recalled.

Leonard works in the Danfoss Power Solutions Division designing hydraulic pumps and motors that are used in off-highway machinery for farming, mining, and construction locations. 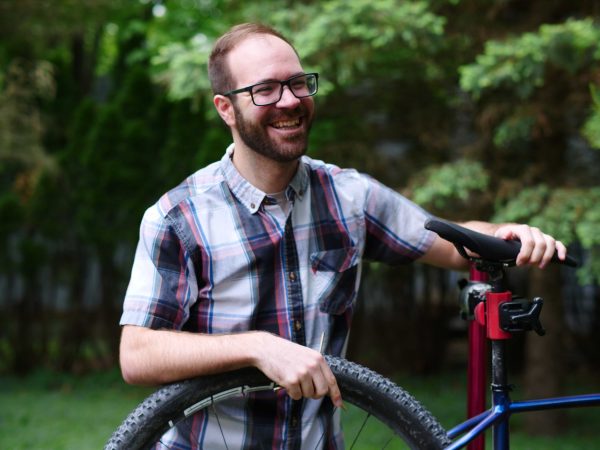 “Danfoss has locations all over the world that specialize in various products. But it just so happened that the we have a plant that’s of similar size and focus area in Germany,” explained Leonard. “I interact with my German colleagues quite regularly.”

One misconception that Leonard sometimes heard from engineering students when he was at Iowa State was that because so many Germans—particularly younger ones—speak English, there’s not much benefit to learning German.

“In my experience, Germans are surprised and excited to connect to someone who can speak German,” explained Leonard. “In a business setting, knowing German has enabled me to build good working relationships. It has also been helpful to staying up to date on technical developments in Germany. I can read the original technical documents, research German patents, and review final documentation.”

For Leonard, learning a second language is vital for those who want to work in multinational areas.  He recommends that when they start searching for jobs, if they know a company has locations or does business in locations that speak their LCP language, make sure the interviewer is aware of that.

“Most companies are so global now that you can expect to be interacting with people who speak French, German, Spanish, Chinese—and beyond,” said Leonard. “Even if your meeting is conducted in English, just having that experience of being a language learner helps you understand what your colleagues from around the world are feeling in the moment. You remind yourself, ‘I am the native speaker here, and I need to be patient.’”

If he had one wish for fellow language learners, Leonard said it would be for them to continue to support foreign language programs in middle and high schools. He credits his early exposure to German with his success today.

“If you have a chance to thank that teacher, do it,” he says. “Or better yet, if you see cuts to foreign language programs in your hometown, let them know what a difference it made to you.”