The First Adventure After Iowa State 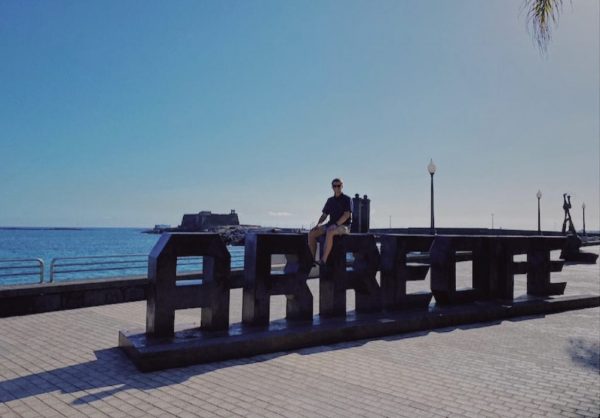 How do you launch into a new life when graduating during a global pandemic? For Timothy Peterson (’20 Spanish) plans kept changing, and he kept rolling with it. Step by step, he’s managed to forge ahead without always knowing how things would turn out. His current career trajectory started nearly four years ago. While home for Thanksgiving during his freshman year, Tim had a conversation with his uncle about his future.

“My uncle is an oral surgeon,” Tim explains on a Webex call from Lanzarote—the northernmost of the Spanish Canary Islands. “He suggested that I consider his line of work. I thought about it. Doing something in the medical field interested me, but I wasn’t sure at the time.”

Tim continued to progress in his studies of Spanish at Iowa State. During his junior year, he spent a semester abroad in Caceres, Spain. During that time, he had an internship at a local dental clinic. For about 12 hours each week he did everything from filling out paperwork to observing dental procedures. Tim admits that his study abroad experience had a profound effect on both his language skills and his career aspirations.

“My vocabulary grew so much during that time. I was surrounded by the culture, sure. But I also learned so much medical vocabulary in the clinic that I just never would have encountered in a classroom.”

With his eyes clearly on applying to dental school, Tim envisioned a career as a dentist who could also communicate well with his Spanish-speaking patients. Only one thing stood in his way at that point. He knew he would need to take more science courses before graduation to meet the dental school prerequisites. That meant graduating in the summer rather than spring and postponing dental school applications for a year.

“I had often planned to take a gap year after Iowa State,” he says. “So it wasn’t a real setback to graduate a little later.”

In the spring of his senior year, Tim applied and was accepted into to North American Languages and Cultural Assistant Program. The program is run through the Spanish education ministry and recruits American and Canadian recent college graduates to serve in the Auxiliares de Conversación program as classroom assistants. They work for 12-16 hours a day in a school alongside regular teachers. Their job is to help students with their conversation skills and give lessons about North American culture.

When COVID-19 first hit, Tim was uncertain if the program would continue. Borders were closing, and flights to Europe were being cancelled.

“I decided to just take it as it comes. I didn’t want to stress about things I couldn’t control. I figured if I couldn’t go this time, I’d just find a temporary job and apply again in a year. I’d let my plans adapt.”

Fortunately, the program was continued. Tim obtained a student visa to be able to travel to Spain and, at the beginning of October, he was on a plane headed for the island of Lanzarote by way of Madrid.

“I arrived in Lanzarote sight unseen,” he admits. “It had only seen pictures. But I think it’s going to be a good year. I’m looking forward to it.”

How is your post-graduation adventure going? Tell us about it by emailing wlc_outreach@iastate.edu.